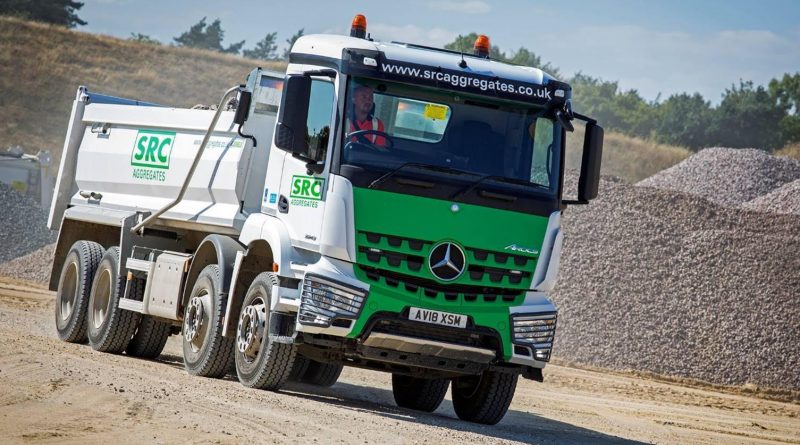 SRC Aggregates acquired its first Mercedes-Benz truck with the intention of running it for a year before deciding whether to buy more – but just eight months later the Essex-based company returned to Dealer Orwell Truck & Van with an order for a further five 8×4 Arocs.

Particularly impressive for the family-owned operator has been the original tipper’s outstanding economy. The Mercedes-Benz is returning just over 8.5 mpg, a performance that puts it three-tenths of a gallon ahead of the ‘best of the rest’ – most of SRC’s 92 trucks are by the same Swedish manufacturer.

Like that first vehicle, four of SRC Aggregates’ latest Arocs are 3243K models with ClassicSpace M-cabs and advanced, 10.7-litre straight-six engines which produce 315 kW (428 hp) and are paired with Mercedes PowerShift automated transmissions. Their steel tipping bodies are by Boweld. The fifth, a 3243B variant with the same cab and engine combination, is fitted with a Putzmeister concrete mixer drum.

With headquarters at Highwood Quarry, in Great Dunmow, near Stansted Airport, and four other quarries in Essex, SRC Aggregates offers a comprehensive portfolio of high-quality aggregates, waste disposal and recycling services. It also has a well-established pedigree in construction and civil engineering projects, and specialises in the planning and development of quarries.

The Arocs are smartly turned out in the company’s distinctive green and white livery, with painted grilles, sun visors and LED running lights. The six vehicles it has now acquired from Orwell Truck & Van – together with a single, pre-built 6×4 Arocs mixer advertised online and purchased directly from the bodybuilder earlier this year – are all working from SRC’s Crown Quarry, in Colchester. The subject of Mercedes-Benz Complete Service Contracts, they are being inspected and maintained at Orwell Truck & Van’s workshop in the town.

SRC Aggregates Transport Director Clint Layzell recalled: “We’d not run Mercedes-Benz trucks before, so took a bit of a gamble when we ordered our first Arocs. It’s certainly paid off, though, because that truck has been the most fuel-efficient eight-wheeler on the fleet – it’s at least 0.3 mpg ahead of our established vehicles, which is pretty impressive.

“Ultimately, of course, reliability and aftersales back-up are going to be every bit as important as economy, if not more so. We’re the sort of company that needs suppliers who will work with us. For a Dealer, this means having the rights parts in stock, and an all-important ‘can do’ attitude, so that our trucks come out of the workshop on time, in a clean condition and ready to go to work.”

He continued: “These are still early days, of course, but it’s fair to say that Orwell Truck & Van, and Mercedes-Benz, have made a good start. From a sales perspective we’ve been looked after very well by the Dealer’s representative Ben Sheldrake, while its Service team are also sticking to the commitments they’ve made – we’re dropping the vehicles off in the afternoon and picking them up again at 6am the next day, with everything having been done to the high standard we expect.” 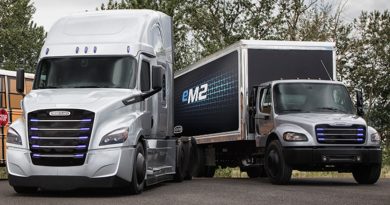